When visiting Las Vegas, there are so many things to do, how can you possibly fit everything into your schedule? The sobering truth is you can’t, but at the very least, you must catch at least one live show, no trip to Sin City is complete without one.

So, how you do you pick the one that best suits your tastes? Check out our list of some of the best productions on the Strip to help you make your decision: 50 Shades! The Parody: Presented at Bally’s
Virtually every grown woman in America was waiting on pins and needles to see the movie interpretation of their favorite book, only to be sorely disappointed when it came out in theaters. This production turns all of this disappointment on its head and will show you that raunchy behavior, lame plot lines, and bondage are much more hilarious than previously thought.

Raiding the Rock Vault: Presented at the Tropicana
Are you a fan of old school rock and roll? The former band members of Whitesnake, Heart, and other arena rock bands have come together to create a concert time machine. That is, you will be taken on a trip through the late -60s to the mid-80s, where you can expect to hear classic rock anthems like Smoke on the Water and Livin’ on a Prayer played at the highest volume imaginable. Who doesn’t want to see a show where blue men are banging on a ton of stuff? This show has been around forever, but it’s popularity is still at an all-time high, thanks to the production staying current with up-to-date references that will have you dancing in your seat.

Absinthe: Presented at Caesar’s Palace
For those of use who love a bit of raunchy fun, Absinthe transports you back to the days of snake oil salesmen, freak shows, and carnies. The show is incredibly intense, filled with risque behavior, stunts, and humor, that will intoxicate you in a similar manner to the drink it’s named after.

Penn and Teller: Presented at the Rio All-Suite Hotel & Casino Virtually everyone has heard of the legendary comedy/magic duo Penn and Teller, known for putting on quirky productions that amaze, inspire, and make you laugh all at once. Their show features big stunts and illusions, some political commentary, and tons of fun for every magic lover to enjoy – you right even get a chance to see how they do some of their tricks. Needless to say, if you are looking for the same old magician’s staples, like pulling a rabbit out of a hat, you’ll be sorely disappointed here. 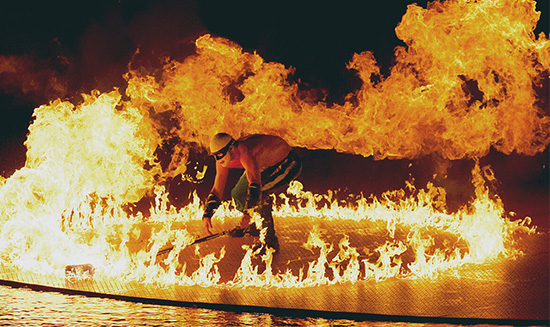 O by Cirque du Soleil: Presented at the Bellagio
If you are a fan of the Cirque, you’ll love this high-flying stunt show set over the water. The production is one of the best around, but you’ll have to excuse some of the characters who resemble something you would expect to see in the movie Eyes Wide Shut.

Rock of Ages: Presented at The Venetian
Love singing along to songs by Pat Benatar and Journey? Enjoy all of your favorite big-haired hits from the 80s in this loud, but awesome, production that will transport you back to the days of Aquanet hair spray, leg warmers, and the best music of all time.

Pin Up: Presented at Stratosphere
What could be better than a Playboy Playmate? How about former Playmate of the Year Claire Sinclair? Watch as she dresses up and takes her clothes off during her calendar girl routines as the star of Pin Up, a high-energy musical production featuring some of the best musicians on The Strip. 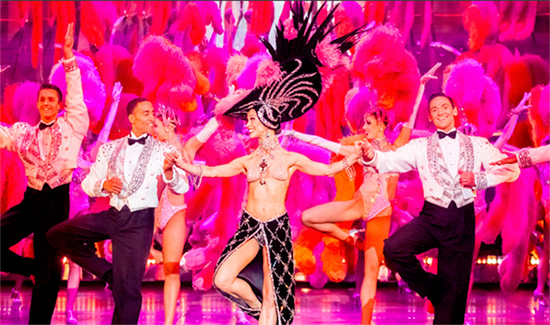 Showgirls have been part of the Las Vegas panorama for decades – keep this tradition alive by giving Jubilee, the longest running production on the Strip, a try. Plus, it has recently been revamped i.e. the girls have been taught modern dances by the guy who choreographed Beyonce’s Single Ladies video. But, don’t worry, the old school elements (like the sequins, tuxedos, and top hats) that made the showgirl tradition famous are still intact. The iconic entertainer, David Copperfield, made history in the 1980s with his magical television specials where he did amazing things, like make the Statue of Liberty disappear. Now, you can catch him (and his amazing illusions) in an intimate, cozy theater on the Las Vegas Strip. But, be warned, the small space doesn’t mean that you’ll be any less impressed. You’ve never seen or heard the story of Frankie Valli & The Four Seasons quite like this. This production is surprisingly compelling, akin to an episode of VH1’s Behind the Music. But that’s not all, the fantastic dialogue, energetic music, and the drama, cursing, and intensity all combine to create a one of kind show that will blow your mind.

Your Guide to Vegas’ Secret Bars and Restaurants